I saw a classic infomercial the other day. They seem to run it mostly during daytime television and late at night. Advertising costs less at those times, and I think they assume that anyone watching TV during the day or night is jobless and desperate.

Oddly, I am neither, but there I was. It was my lunch break.

Anyway, this program was hawking something called “Winning in the Cash Flow Business” by Russ Dalbey.

At this point, you might be detecting a little sarcasm in the tone of this article. In fact, I don’t believe a single word of this advertisement.

First and foremost, if it was that easy to make over a million dollars a year, don’t you think a lot more people would be doing it?

Here’s how the system is supposed to work, according to what I saw on the infomercial and gathered from some Internet research: you (allegedly) make money by brokering “cash flow notes” through Dalbey’s America’s Note Network. Cash flow notes are used for things like lotteries and legal settlements that are paid out in small amounts over the course of several years. What you’re essentially doing is buying someone’s regular payouts for one (smaller) lump sum, and then selling the promissory note to someone else. According to the infomercial, it’s as easy as “Find ‘Em, List ‘Em, Sell ‘Em.”

Now, here’s what actually happens, according to my research: you pay an upfront fee for materials that are supposed to teach you how to get started in this business, which opens you up to nearly instant, aggressive telemarketing calls from the Dalbey Education Institute. When you have trouble getting started due to limitations by state and local laws, or just the difficulty in finding people with cash flow notes in the first place (how do you find out who has these things?), you purchase more materials and coaching sessions and other assorted garbage. By the time you’re a good $800 in the hole (or more), you start to realize that you’ve bought into a scheme that doesn’t really work.

So, is it really a scam, in the usual sense of the word?

On a legal level, I’d have to say no. If you were already a talented salesperson, and if you had a way to get around the obstacles that would keep most of us from finding out who has the cash flow notes in the first place, and if you got really incredibly lucky, there is a tiny, tiny possibility that you might see a profit. They weasel around those million-to-one odds with a variation on the old “results not typical” disclaimer that’s served the weight loss industry so well.

On a practical level, I’d have to say yes. It just feels like a scam, and for a vast majority of people, it ends up functioning the exact same way: you lose money, you get nothing to show for it.

For me, I’m ignoring this infomercial. I strongly suggest you do the same. Even if you are a talented salesperson with a knack for making things happen, you’re better off focusing your strengths elsewhere. This is just too big of a long shot.

Now, I personally believe in abundance, even in a bad economy. There is an awful lot of money out there, and most of us have something that we could leverage into a piece of that pie. I also believe that it’s possible to do what you love while earning an abundant income and not having a traditional job. However, you have to work with the tools you have as an individual, and use them to deliver something of value to others. In other words, you’ve got to create your own system.

You also have to have a passion for whatever it is you’re doing, and more than the average level of courage. You can’t just buy into some prefabricated system and hope to get lucky. You create your own luck when you leverage your talents and passions into income.

In the meantime, steer clear of this mess.

I suppose this post technically isn’t about scams, per se. A scam, in its simplest form, is when someone takes your money without giving you anything in return.

But what would you call a job listing that misleads you as to the nature of the job, promises a fat paycheck that will never materialize, and comes from a company that dodges basic questions about salary, benefits and basic descriptions of the job?

I know what I’d call it: a scam. Plain and simple.

These advertisements are often found in the Classifieds section of the newspaper, but I’m told they’re just everywhere on CareerBuilder and Monster (as well as every other job search website in the universe). They’re aimed at recent college graduates, but people from all walks of life fall for them. In the current economy, with unemployment running wild, I’m sure more people than ever are applying for these jobs.

So, how do you avoid these less-than-honest job offers?

The best defense is just to not answer these ads in the first place. Nobody is handing out jobs in the music business in this (or any other) economy.

Your other best defense is to be informed. Do the following Google search: “[name of company]” scam. You might find out everything you need to know with that one step. Trust your instincts, too—if something about a job offer or interview doesn’t seem quite right, it probably isn’t.

I found a couple excellent articles on this topic, both written by Willy Franzen at One Day, One Job, a site for post-college job hunters:

As far as I’m concerned, both articles are required reading for yourself and for any people between the ages of 16 and 30 you might know. The Landers Group is a company that operates under about a thousand different names, and runs a lot of these schemes.

Is it a true scam? No. Ultimately, it is a job, and I suppose if you sell a lot of coupons in The Worst Neighborhood In The Universe (or elsewhere—they don’t only stick to TWNITU), you might be able to make a few dollars.

Should you avoid it anyway? Yes, yes, and yes.

One more thing you should do: when young people come to your door selling coupons or magazines (“Mag Crews” are a whole other topic, not really fraud-related), be nice to them. They’re very probably stuck in a terrible job very far from home, with no money or way to get back.

On Monday, I posted about an incredibly sleazy debt counseling commercial, and promised to find out who it was and post their BBB rating and some other information.

Well, apparently this ad is a “turnkey” job, where an advertising agency creates the commercial, and then plugs in the phone number of whatever company buys the ad from them. In other words, the company running the advertisement here in Northwest Indiana might not be the same company that uses it in Cleveland or Las Vegas or Anchorage.

Basically, that means I can’t call them out by name and post their BBB ratings, because it could be many different debt counseling companies.

However, what I can do is post a couple screenshots, so you’ll recognize it when you see it.

This is not a real news broadcast: 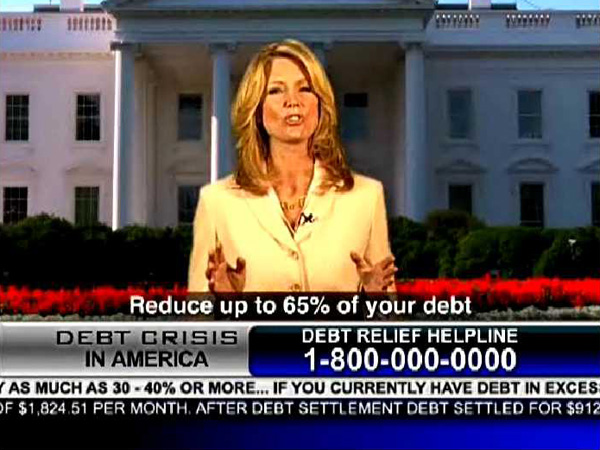 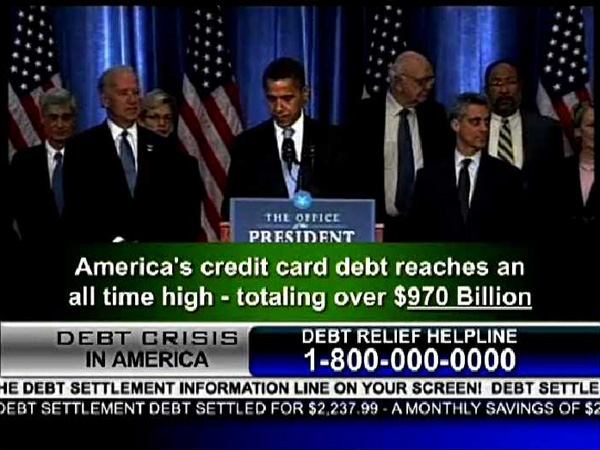 Everything I have said or am about to say is my opinion. In other words, if your debt counseling company has been using this ad, save your time, money and breath. I’m not going to soften my position on this out of fear of litigation, because you haven’t got a case.

I believe that any debt counseling company that is using this advertisement is deliberately misleading consumers. They are running an advertisement specifically designed to trick people into thinking it is a genuine news broadcast (fine print or not), and that the President endorses their services. I would not give this advertisement a second glance, but if you want to figure out who is running it and what their BBB rating is, just for fun, try catching the phone number and Googling it when it appears on your TV.

If you are running a legitimate debt counseling company and have been using this commercial, I would stop running it immediately. You are going to damage your credibility because of people like me throwing you under the bus with the scumbags. You may be providing a wonderful service to those who need it, but your advertising is telling a different story.

If you are running a legitimate debt counseling company and have been considering using this commercial or similar, don’t. I don’t care how cheap it is. You don’t want to paint yourself with the same brush as the crooks. Looks sleazy? Is sleazy.

I just saw what may have been the sleaziest credit counseling commercial I’ve ever seen.

It appeared on the Weather Channel around 2:30 PM local time (I was watching Full Force Nature; they had some really killer close-up tornado footy).  Now, sleazy ads during daytime television are nothing new, but this one was incredible.

It began with footage of the President giving an address about the economy. I don’t know the date or specific topic of the speech—I know he used the phrase “drastic action.” This was framed by graphics designed to closely emulate the look of a broadcast from a cable news channel. There was a headline at the bottom of the screen about debt counseling, with a ticker underneath that, the kind they normally use to give up-to-the-minute stock prices.

After the (out-of-context) presidential clip, it cut to a woman in front of a photo of either the White House or the Capital Building. She was dressed in a sharp suit like a news anchor, and was telling you to call now for information on debt elimination. The headline and ticker remained at the bottom of the screen. If you weren’t paying close attention, you might easily mistake it for a genuine news item. Naturally, the color scheme of the ad was red, white and blue.

Of course, it wasn’t real. Consider these facts:

I didn’t catch the name of the company, but I wish I had. I’d gladly post it here, along with their BBB rating and the advice to not use their services. If I catch the commercial again, I’ll make note of this information. If it is a legitimate, non-profit counseling service, they need to be told that their advertisements are misleading and unbecoming. If they’re not, they need to be called out on it and run out of business.

There are real, non-profit credit counseling services available for those who need them. REGIONAL has a relationship with Consumer Credit Counseling Service of Northwest Indiana. They’ve got an excellent BBB rating.

If you’re in a different area, start with the Better Business Bureau, and don’t use any service with anything less than an A rating.