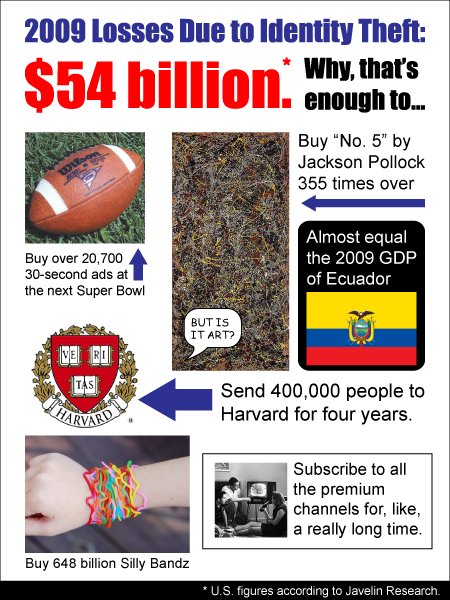 Predictably, incidents of identity theft hit an all-time high in 2009, according to the latest study by Javelin Strategy & Research.

This really isn’t much of a surprise, what with the economy in its current state. However, it seems the actual impact on consumers has either leveled off or decreased. In other words, while more people were victimized last year, it cost them less time and money to fix. Key findings from the study:

So what does all this data mean?

It seems to indicate that, while there were a lot more victims in 2009 in sheer numbers (yet only 0.1% more than 2003), identity theft isn’t quite as difficult as it once was to resolve. Basically, procedures are now in place to help victims deal with this crime, whereas everybody was still sort of flailing five or six years ago.

From 2003 to 2005, it actually seems to have become more difficult to resolve identity theft, according to past Javelin studies. I think a lot of businesses and municipalities were just beginning to understand the seriousness of identity theft during those years, and their early attempts to deal with the problem probably weren’t as efficient as they would later become.

Federal, state and local laws have also begun to catch up to the reality of the situation in the last few years, but I think consumer vigilance has played a key role in this trend. In general, people are more aware of the dangers and more aware of the signs, and as a greater portion of the population begins using online financial tools (which operate in real time, or as close to it as you can get), more people are catching the fraud sooner, and swift action is always best in these cases.

Don’t get me wrong. It’s still a pain to have your identity stolen, but at least it’s begun to cost less time and money to resolve the damage. You don’t want to lose 21 hours or $373, but it beats 40 and $746 by a long shot.